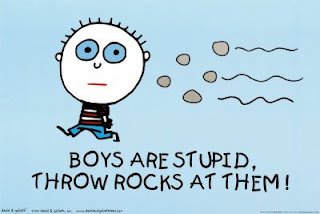 What is it with guys?

Jen, at Happily Ever After Land, posted this morning about the “love letter” she thought her husband sent her. Turns out, he didn’t send one (read her blog to see what he really sent), and, so far, he doesn’t seem to understand that she really, really wants one (by the way, leave a comment on her post so her husband will “get the picture.“).

Jen’s scenario isn’t a new one — many of us have experienced this romantic letdown. We dream of roses and lovingly penned words read by the flickering light of candles . . . our boys are dreaming of football and see-through lingerie (lights optional). Not quite the same, it it?

My boy is the same. Oh, he has grand notions and plans to display the grandest of romantic gestures, but the follow-through isn’t always there. Now, before I go any further, please understand that my husband is wonderful in many, many ways and shows his love for me in many, many ways (example: all last week he cleaned the kitchen before leaving for work — just because he thought I would like it. He was right!). But, when it comes to being Romantic, sometimes his plans fall apart.

Let me give you an example.

Usually, the one romantic letter I get is given to me on my birthday or anniversary. Hubby is a good, honest writer and these letters always bring a fountain of tears gushing. Hey — I’m a girl. Tears happen. I love these letters — they give me insight into my husband’s softer side and I get a “romantic-fix.” It’s nice.

There was one year, though, where Hubby’s soft side went south. Wayyyyy south.

My 28th birthday arrived with a new gloom. Only 2 more years until the big 3-0. AHHHH!!!!! I was in a panic, feeling the pressure of aging before my time. It was awful. One afternoon prior to my birthday, as we were on the couch watching some random show, I remember suddenly bursting into tears. Alarmed, Hubby asked what was wrong. My response? (cue the sounds of blubbering and snorting) “I’m nearly 30!”

My birthday arrived. All day long, as I dealt with my hormonal and hyperactive 9th graders, I daydreamed about the letter and card Hubby would give me that night. I couldn’t wait to read the sweet words, his dreams about our future, his love for me. It was going to be the one bright spot in a sea of dark, nearly-thirty muck.

Later that evening, he proudly handed me the card. I remember smiling as I turned the envelope over to open it. “My husband is the best,” I thought.

The front cover didn’t match up with my romantic daydreams. It showed a gangly, mustard colored dog lazily laying on the ground, with one leg suspiciously raised. Above his heads, bright letters mockingly said, “It’s Your Birthday!”

I looked up at my husband, who was grinning from ear to ear. Then, slowly, I opened the card.

I was greeted by bold, black letters screaming, “DO WHATEVER MAKES YA FEEL GOOD!”

Hubby wasn’t grinning for long, and, thanks to a quick phone call to my Mama and his Mama, he learned why that card was NOT appropriate for a wife.

« New Blog for YOU!
Semi-Wordless Wednesday »