You may have noticed Tuesday when I posted a quick write-up on Fall-Decorating. I had planned, while I was busy in the act placing pumpkins, to write just a normal post about the deco, but THEN I found The Inspired Room.

“Oooooo,” I remember thinking. Here it was — a treasure trove of like-minded individuals. Women bloggers who also were filled with autumnal cheer. Granted, they were most likely better decorators, but I knew they’d be forgiving of my poor attempts to make my house pretty.

Eagerly, the Little Lady and I took pictures of our carefully placed items. Ok, ok — I took the pictures while “shooing” the Little Lady out of the way. She was left speechless. (Well, if she could form sentences, I’m sure she would have been speechless.) The Little Lady couldn’t believe I had the camera out and wasn’t making her stand still and say “CHEESE!” It was the first time in her entire LIFE (all 14.5 months of it) that I wasn’t trying to get a quick pic. “Well, too bad, Little Lady, too bad. We all have to grow up sometime . . and Mama has blogging things on her mind now.”

With the pictures taken, downloaded, and photo-shopped, I quickly spun a tale about my Day O’ Decorating. Quick spell-check and publish. Done.

A few hours later, as my husband listened to J. Lieberman explain why (as a Democrat) he was supporting McCain, I revisited The Inspired Room. I was going to be a good participant and visit the other bloggers who also were “Fall Nesting” this week.

Eyes scanning the list of names provided by Mr. Linky, I looked to see if there was anyone I already knew.

I clicked on the name, ready to find out that Martha Stewart was really some guy named Larry, an obsessed Martha-holic who had a fan-blog dedicated to all things Martha. I expected to find pictures of his gourds and black cats. I expected to even see a pic of Larry himself, hugging a cardboard cut out of Martha.

I didn’t expect an actual picture of Martha.

Crap — I just posted pitiful, paltry excuses for fall decorating on the same site as MARTHA!!!!!!! Oh my gosh — what if she comes back like I did? What if she’s a good participant too? WHAT IF SHE VISITS PARTICIPANT#36 — FOLLOWING IN MY SHOES!?!?!?!?!?

I tried to calm down, assuring myself that she probably doesn’t write her own blog or surf others. Probably she just has a well-dressed assistant, probably named Larry, who does all of this for her and just joined the meme to get traffic for his her blog. “Yeah, that’s probably it, ” I thought.

Trying not to hyperventilate, I called my husband away from the RNC. When he arrived, I took him, mouse click by mouse click, through my discovery. Then, he asked to see my pictures. I showed him.

And, then, he slowly shook his head.

Even my decorating-challenged husband recognizes the sad, sad truth. 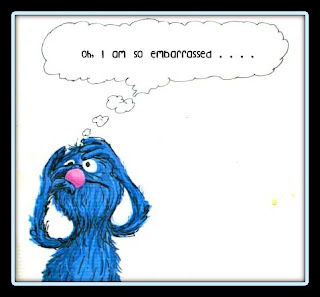 « Semi-Wordless Wednesday
Passing It On »