Let me preface this whole post by explaining three things.

With the Little Lady, we knew right away she was a girl because . . .well . . . that’s information that gets shared pretty readily when you’re adopting.

With Mr. Boy, I never considered NOT finding out his gender, even though I *knew* from early on that he was going to be a boy.  As soon as I could, I scheduled the BIG ultrasound.  No waiting around for me!

But, with this one, Numero Three, Hubby has — out of the blue — decided it would “fun” for us to refrain from learning the gender at any point during the pregnancy.  That’s right — he wants to wait until I’m splayed out on an operating table (repeat c-section. . .woo hoo) to learn whether or not the baby has a stem on his/her apple.

His terminology, not mine, folks.

Despite my protests, arguments and pleadings, Hubby isn’t waivering.  At all.

Now, as much as I neeeeeed to find out the gender in advance of the birth (Mama’s gotta get her prep on — coming home outfit, bedding, etc.), I also understand my mean husband is partly responsible for this whole surprise pregnancy and should probably have some say in a few matters.

(but he’s still a meanie)

But, to assuage my craving to learn the baby’s gender, I’ve decided I’m going to try every Old Wives Tale and Over The Counter gender predictor. 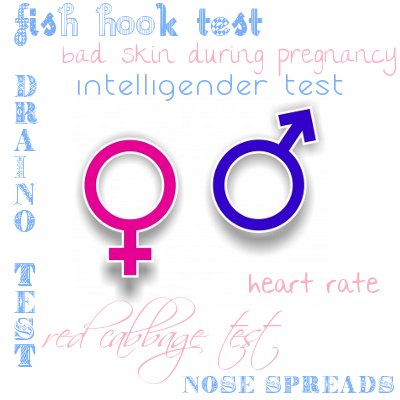 'Cause, they're all as accurate as an ultrasound, right?

Each week, I’m going to post the results of my most recent scientific experiment.  That’s right — weekly.  There are a LOT of “ways” to learn the gender — did you know that?  Nearly enough to last the rest of my pregnancy.

There are the over-the-counter tests, like Intelligender (which Trisha of MomDot recently used for her VERY accurate gender prediction results) and Gendermaker.

There are the DIY tests like the Red Cabbage Urine Test or the Draino Urine Test.  Yes — those are real tests.  I am not making this up.

Then there are the Old Wives Tales — like if your nose spreads/widens during pregnancy, you’re having a boy.  (doesn’t that sound attractive?)  Or, if there are fish-hooked shaped blood vessels in your eyes.  . . that can determine gender too.

We’ll keep a tally and see which of these very scientific methods is truly accurate.  It’s all about the science at this point, y’all.

If you know of any “ways” to “know” the gender, share them below in the comments.  I’m still working on my list o’ experiments. . . .share yours and I’ll try it!!!

In the meantime, you can also either (a) try to convince me that being “Team Green” really is wonderful or (b) give me tips on how to convince Hubby to let me get the BIG ultrasound.

« Trying To Protect My Children While Blogging
Making Valentines — with Toddlers. »