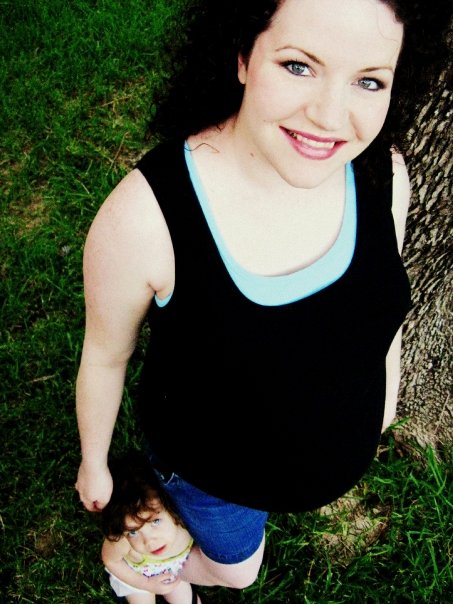 That Tuesday (August 25th) started as every other day in August– I was still big and pregnant. Very big. Very pregnant.

My mom and sisters were determined to be as helpful as they could; they offered to cook and clean . . . and offered every labor inducing tip they had ever heard.

I decided to try one of the tips: walking. That hot Houston afternoon, we spent HOURS and HOURS walking in our area mall. Oy, ve! That excursion became more and more painful with each step, and the baby felt heavier and heavier. I secretly hoped that the pain and heaviness meant progress, but I didn’t expect anything to really happen. After all, for weeks, my doctor’s appointments had been just the same: 1 cm dilated. No more — no less. (sigh)

When we returned home, my youngest sister decided that it was time for a maternity photo shoot, “just in case” I went into labor. “Whatever,” I thought. I hate having my picture taken and I KNEW that taking a few awkwardly pregnant photos was NOT going to make me go into labor. But, I humored her and (not so graciously) allowed her to take a few shots. 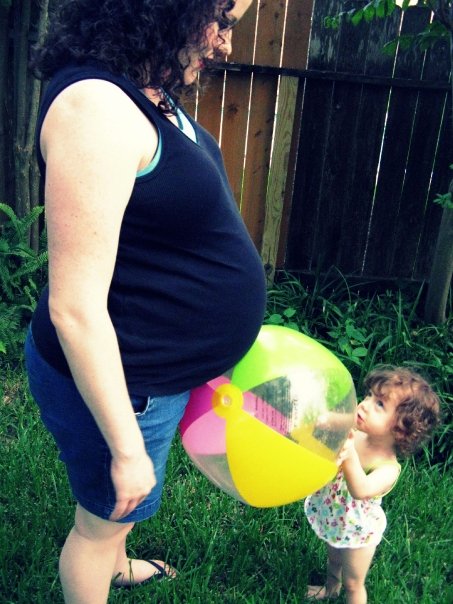 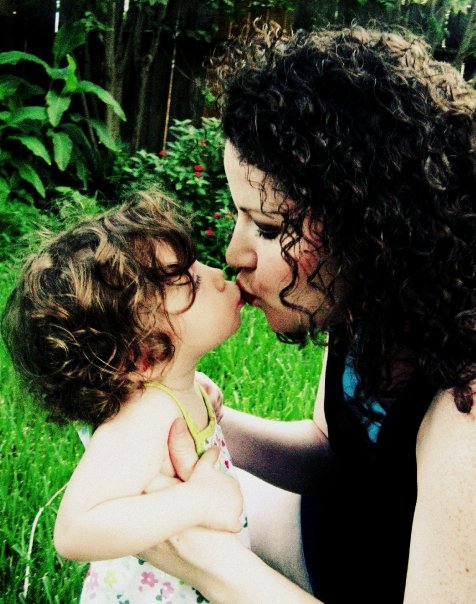 Whether it was the walking, the food I consumed that day, or the photo shoot (or the little bit of castor oil that “someone” may have tried taking) I’ll never know for sure. But, that night, I went into labor.

The contractions began around 11 pm but I (stupid, naive me) didn’t recognize them as being real contractions. I assumed my digestive system just didn’t appreciate the spicy, rich meal I had eaten for dinner. Then I realized that these “stomach pains” were coming every two minutes and lasting about 45 seconds. Hmmmmmmmmmm. . .

Waiting to see if they would dissipate, I held off on going to the hospital until around 1:30 am. I had watched multiple episodes of “A Baby Story” and all of the Discovery Channels maternity shows (including the television version of “Pregnancy for Dummies”). I KNEW that first time moms had a higher chance of false labor. I did NOT intend on being the “dumb, anxious mom” who showed up at the hospital, only to be sent back home.

The other adults staying at my house thought otherwise. When I reached the point of crying and writhing with each contraction, my mom, sister, and Hubby convinced me that it was time to go. At that point, the contractions were coming about every minute and were EXCRUCIATING! I say “bull” to the preparation material I read that said contractions are mildly uncomfortable. BULL! Those suckers were absolutely ridiculous.

My hospital is, thankfully, within five minutes of my home. Not that such a short distance mattered during the wee hours of the morning. It turns out that all of the main entrances are locked and barred at 2 am. Yep — every conveniently placed door was a “no go.” So, Hubby and I walked and walked and walked. Well, HE walked. I don’t know what you would call the movements I was displaying. Hobbling? Stumbling? Limping? By the time we reached a working entrance, I was beside myself at that point, crying and cussing without regard for who saw or heard me.

Once I filled out my admission paperwork (which, by the way, it is seriously cruel and unusual punishment to make a woman stand and fill out paperwork while she’s having contractions), I was hooked up to the monitors and my nurse confirmed that I was having real contractions. REAL CONTRACTIONS. Could it really be so? Was I going to be allowed to stay at the hospital? Thirty minutes later, the nurse checked again and, in a matter of fact voice, announced I was 4 cm dilated and good to stay for delivery.

At that point, I was given my epidural. THANK GOD for the person who invented this. Oh, my gosh! I don’t know how you natural labor mamas do it — I could NOT! I had no idea that my pain threshold was so low until that night. (and, I felt like an idiot that I couldn’t hold it together during a contraction– just like those silly women on the “baby” shows. Sigh)

Once it was in, I didn’t feel a thing; my husband was equally impressed with the miraculous epidural. I went from a crying lunatic to a sane, joking woman who didn’t notice when she was having a contraction. 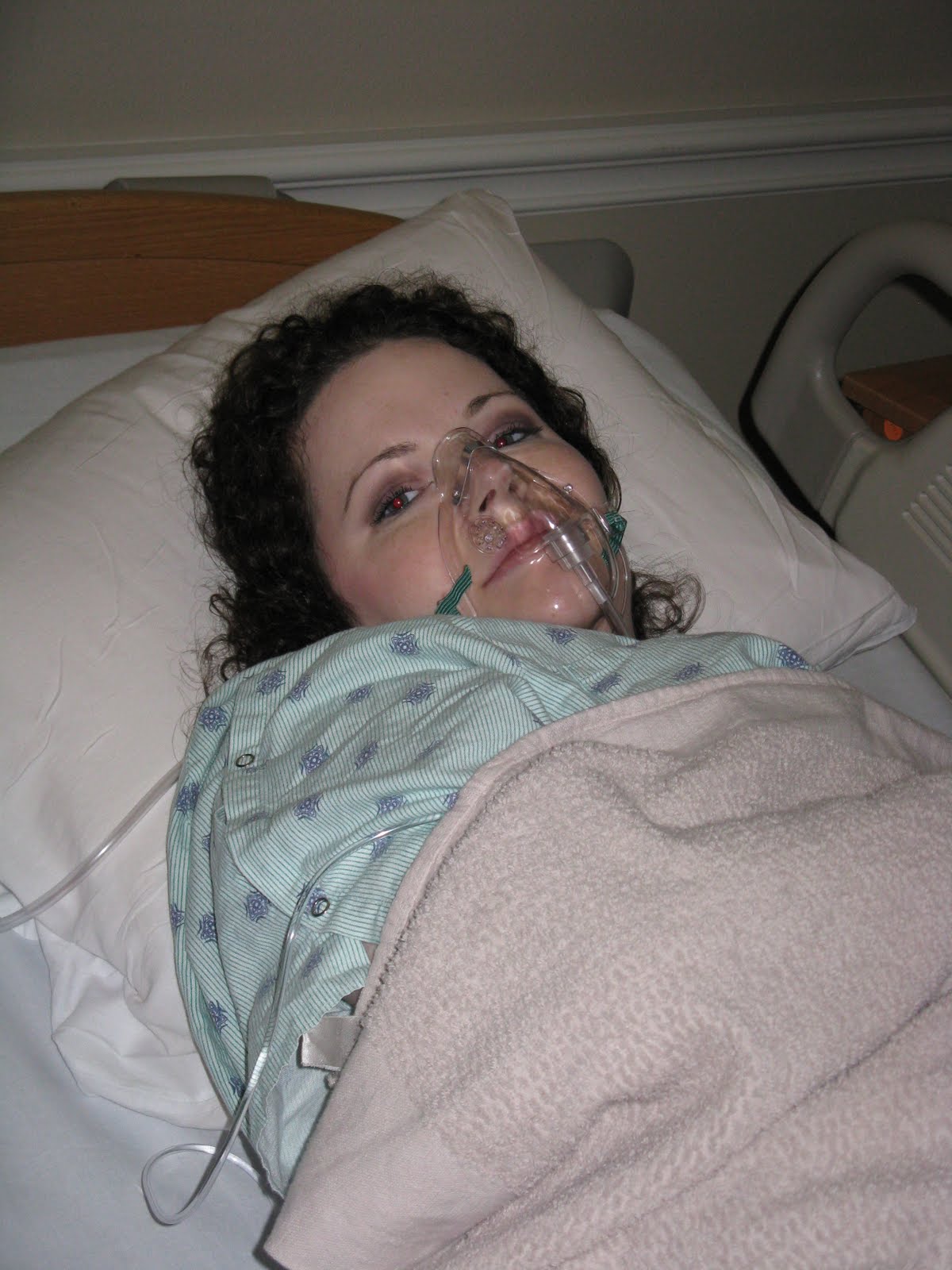 This picture should NOT exist!

Around an hour post epidural, I was checked again. This time, I was dilated between 6-7 cm and my waters were “bulging,” as they say. The nurse called my doctor, and a deal was brokered. IF my waters didn’t break before 6 am, I would receive pitocin and my doctor would break my waters when she arrived. I was glad to hear that news but slightly distracted by the intense itching that was taking place all over my skin (thanks to the epidural). Now, why wasn’t this information included in all of the “getting ready for labor” websites? It would have been good to know that the epidural was going to make me feel like a dog with the world’s worst case of fleas! I was not prepared for the itching!!!! SO ANNOYING!

It was sometime after the epidural that the nurse noticed the baby’s heart-rate was decelerating because of the constant contractions. I was given an oxygen mask and some type of medicine to slow down my contractions. Those two things worked and his heart settled back into a nice, normal rhythm.

(And, yes, I begrudgingly allowed Hubby to take a picture of at this point. And, yes, I regret it now that I’ve seen the picture)

Anyway,
by 6 am, my waters hadn’t broken, so out came the pitocin and, when I had reached a full 10, my doctor broke the fluids and discovered that my little ornery boy had decided to move into a face up position. Lovely.

The baby had to turn over before any pushing could commence. So, I was poked, prodded, and rotated back and forth . . . which worked. He turned over and it was “go time.”

Out came the stirrups.

I sooooooooooooo wanted to laugh at myself at this point — I know that the sight of me, with my feet in stirrups & hands behind thighs, was NOT a pretty picture. Days earlier, I’d been mortified at the though of a natural delivery, because of this very scenario. Again, thanks to all of the delivery shows, I knew how exposed I would be. EMBARRASSING!!! But, when it came down to it, I didn’t care. I was ready to be done!

Pushing wasn’t hard — well, not really hard. I’ll admit that it was a bit difficult to focus in on one area since I couldn’t feel anything . . . or differentiate between my hoo-ha and hiney. But, I pushed anyway.

After an hour, my doctor and nurse could finally see some of the baby’s head, but his heart rate was now accelerating more than what my doctor was comfortable with. She decided that a c-section was the way to go because of the climbing heart rate (which was in the 180s at that point). No more embarrassing stirrups for this mama.

I was prepped and taken to the OR. A new anesthesiologist (with a HOT, sexy Australian accent) gave me a new epidural. Too bad I wasn’t able to keep it together in front of THIS doctor. This epidural was placed higher than my 1st one, leaving me with the feeling that I could NOT breathe. The sensation of “not breathing” and my claustrophobia was not a good combination. I started having a panic attack, crying and clawing at an oxygen mask that seemed to be cemented to my face.

Yeah — full blown, crazy woman panic attack in front of the Hot Doc. Nice. Again — why aren’t there warnings about this? Maybe, just maybe, if I’d KNOWN that I’d feel as though I couldn’t breathe, I could have held it together . . . stayed cool, calm, and collected in front of Hot Doc.

Hot Doc tried to convince me that I was, indeed, breathing normally. Under any other circumstances, I would have loved hearing such a voice talking directly to me. But, this time, I just went crazy, leaving my poor Hot Doc with no choice but to give me a sedative.

And that’s the last moment I remember.  Hubby claims I was awake for the surgery, but I don’t remember anything.  I thought I was asleep.  It’s rather ironic that I remember every detail of the Little Lady’s birth, as I sat beside her birth-mom and watched the delivery . . . but when it was my turn to have that experience, everything went blurry.

As much as I enjoyed my drugs (pre-operating table freak out), I am so sad that I don’t have any memory of my son’s first moments of life outside my body.  I remember nothing about my baby boy’s birth, first cry, etc. I sort of — kind of — remember Hubby bringing the baby over to me, but that’s about it.

After an hour in recovery, teeth chattering uncontrollably from the anesthesia, I was taken to my room, where I was able to see my family and finally met my sweet, precious miracle.

The Little Lady wasn’t too sure about “Bebee Brudder” at first; she would say “hi” and kiss him, but she didn’t want to be left near him. By the time we came home, it was a completely different story. She was giddy with excitement over him, giving him kiss after kiss and asking to “pet Bebee Brudder.” The first time she “held” him was absolutely adorable — she was sooooo proud of herself! Each time he cries (which happens during each diaper change — I seem to have given birth to the only man who hates being naked), the Little Lady rushes over to sing him a lullaby.

And now, let me officially introduce Benjamin Cade (AKA “Bebee Brudder” or “Cade“). 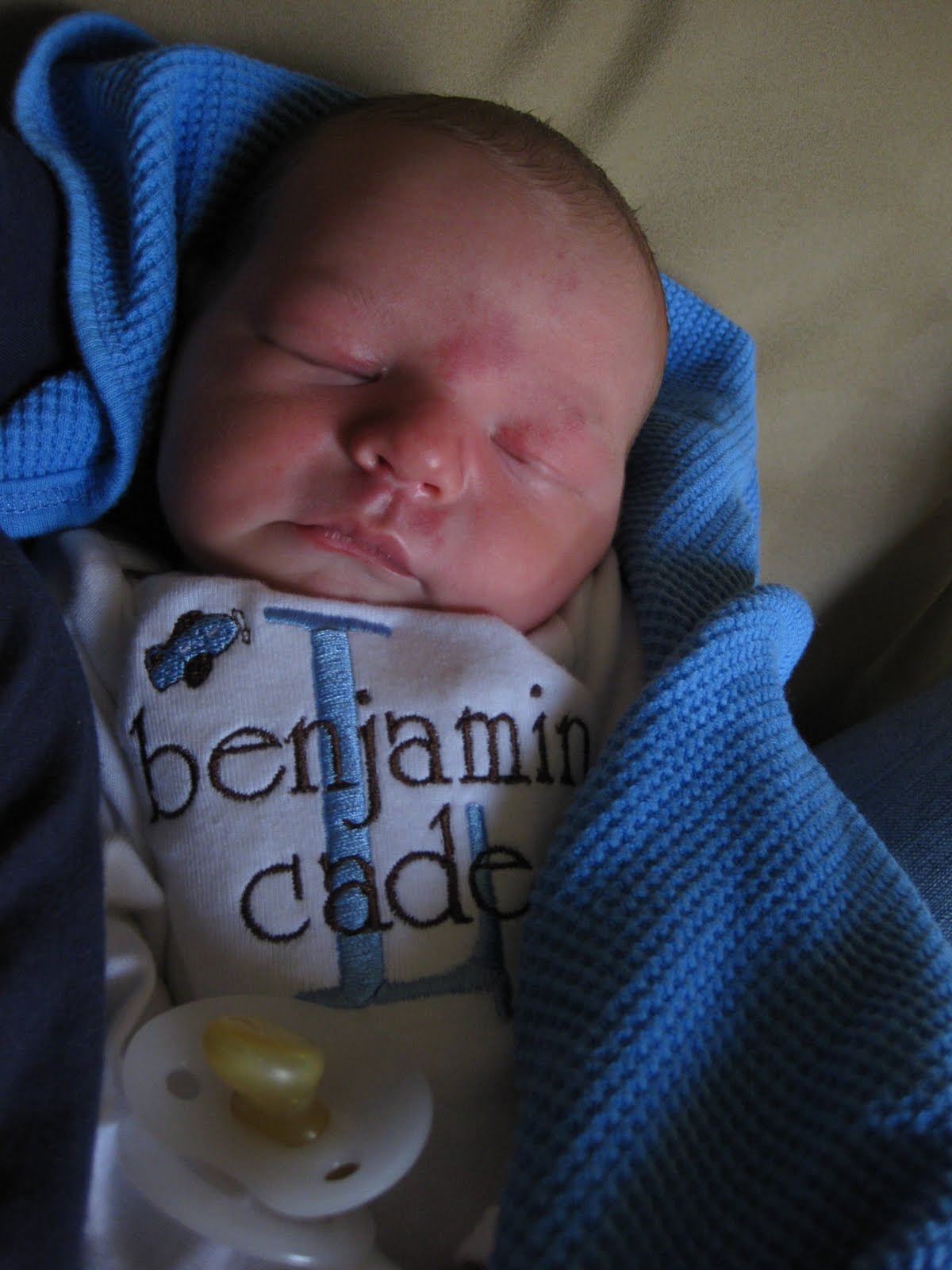 « Prettier By The Day
Havin' A Swingin' Good Time »