The Good News from My Corner of the World?

Breast-milk is what’s for dinner (and lunch, breakfast, and snacks).  And, unlike my experience with Mr. Boy, breast-feeding is going SO much better this time around.  Our latch issues have been fixed and my PCOS supply issues haven’t reared their ugly heads.  In fact, I haven’t used a bottle ONCE with Barney Kneeknuckles.  Woo hoo!!!!

(disclaimer: I have no moral issues against bottle feeding.  I was bottle fed.  The Little Lady was bottle fed.  Mr. Boy was exclusively bottle fed after he reached six months.  But, I am hoping to avoid them with Barney Kneeknuckles… just to see if I can!)

The BAD News?  We’ve been in the midst of a horrendous growth spurt the past few days . . . which means I haven’t been able to do much of anything other than sit on the couch, watch tv, and feed a wee lil’ babe who thinks he is STARVING all. day. long.

As I’ve sat anchored to my couch, wearing my “glamorous” nursing tanks and ancient pajama pants, I have learned quite a few things from the images that have flickered across the screen.

The number one bit of trivia from this week: Elizabeth Taylor had a lot of jewelry.

Designer engagement rings (warning – you may be blinded by this 33.19 carat, VS1 clarity stone): 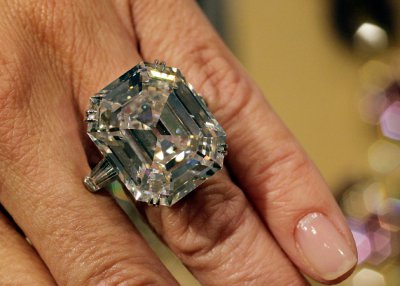 Ancient stones like this Taj Mahal Diamond — circa 1627 (the actual diamond is there in the center … that design was CARVED into it!): 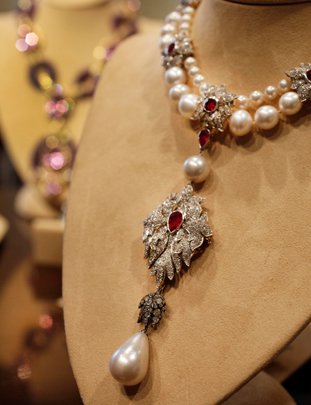 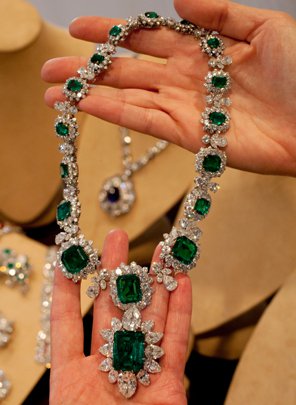 Her entire collection is going up for auction in December.  Yep — those of us with a few hundred thousand dollars to spare can have a part of this unbelievable, glittering tribute to the famous actress.

Well, at least — the rich husbands.

(guess that leaves Number 8, Larry Fortensky, out of the jewelry giving crowd)

Eight husbands in the pages of her diary … and a bunch of cold stones in her jewelry cases.   Aside from her film career, that’s the legacy Elizabeth Taylor left behind.  She couldn’t pick a long-term husband but the woman knew how to pick out some jewels.

I think I’d rather stick with my one hubby, my ancient pajamas, and the nursing tanks.

I think they’re worth a lot more.