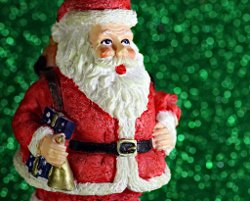 Do your kids believe in Santa?

This is what I’m wrestling with this Christmas season — trying to decide whether or not our kids are going to “believe” in Jolly Old Saint Nicholas.  And by wrestling, I mean struggling… really struggling.

While we have taken our children to get pictures on Santa’s lap every year, we haven’t pushed the modern idea of Santa.  Not yet… mainly because I had not decided what to do about the ol’ guy.

I didn’t grow up believing Santa Claus was real; sure, we sang songs about him and had Santa Claus decorations in our house, but he wasn’t real.  He didn’t live at the North Pole.  And he certainly didn’t bring us presents.  (Mommies and Daddies, Aunts and Uncles, and – of course – Grandmas and Grandpas did that.)

Instead, we focused on Baby Jesus and the true “Christmas Story.”  We had Christmas programs at our church, where my sisters and I took turns being Mary … and where I, at a mere FIVE years old, had MY head measurements used to make the Wiseman crowns for the THIRD and FOURTH grade BOYS who had those parts.  Yes, my head was that big and I still haven’t gotten over the humiliation.

Hubby, on the other hand, BELIEVED in the white haired old man, and Santa was (and is) a very, very, very big deal in his family and to my sweet mother-in-law.  Santa Claus is everywhere in their Christmas and the threat of Santa NOT giving out presents was an excellent motivator for Hubby and his brother to be on their best behavior.

Because he has so many great memories involving Santa and the traditions of his family, Hubby wants to carry the fantasy on with our children.  But, I’m worried.  How will they react when they learn it’s all fake?  A sham?  A fairy tale?

Sure, we can tell them about the original St. Nicholas… but will that make it any better?

Come December 1st, a little Elf will be sitting on our shelf — watching us while we read daily scriptures from our Advent calendar.  Yes, I’m torn but plowing ahead with merging my Christian Christmas traditions with Hubby’s Santa Claus traditions…. and hoping my kids don’t hate me when the illusions fade away.

Hoping it all works.