It’s Wednesday and we’re all being incredibly – INCREDIBLY – lazy today.  No school.  No work.  Nothing to do but watch the Curious George “A Very Monkey Christmas” special.

But, over the sounds of the jeans tumbling in the dryer and the dishwasher blasting away at a load of yesterday’s dishes, I hear something so perfect.  So squeaky.  So beautiful.

I turn from the empty coffee cup in my hand (at which I’ve been staring — in a stupor — waiting for the Coffee Fairy to magically refill it) and see a chubby cheeked, curly headed little boy.  His eyes have only been open a few minutes and his little right hand is clumsily trying to rub away the last scratchy grains of Sleep.

He smiles — happy to be awake and with his family and about to enjoy one of his favorite pastimes: eating breakfast. 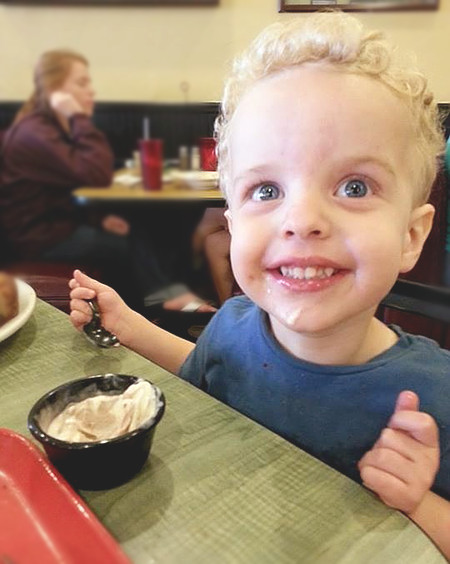 Until this past week or so, Barney’s sweet smiles were the only thing we ever received to let us know he even liked us, let alone loved us.  Words — even the simplest toddler words like “No” and “Mine” — weren’t able to escape his little lips.

“Expressive Speech Delay due to Low Muscle Tone.” That’s what the speech therapist who evaluated him wrote on the paper.  The kid could understand practically everything she asked him and could complete every task put before him … but he couldn’t verbally respond to her or say basic words.

It has been hard — for everyone.  It’s hard dealing with a child who wants to talk but can’t get get his mouth to form sounds.  A child who can get hurt by siblings or friends on the playground but can’t explain what happened — his eyes water with tears and his lips curl down but no words can be found to tell even what hurts.

It’s heartbreaking to see him  wanting to ask for something and trying to gesticulate that desire … but not be able to get you — the Parent who is always “The Solution” to a little one — to understand and respond.

I think we’ve both shared the same number of frustrated tears the past few months.  Even at preschool, there have been times I’ve teared up as I watched him play alone or listened to one of his classmates mimic the nonverbal sounds that Barney Kneeknuckles makes.  It hurts to know your child is funny, smart and ornery … but still different from others his age simply because he can’t talk.

But, little by little, over the past month, we’ve finally begun to make strides.  The silly exercises and games we’ve played to strengthen his mouth and facial muscles have been paying off, and the words have started to pour from his lips.

Every day it seemed that a new word or phrase is getting said by my curly-headed little guy.  But, with each new utterance, I was still waiting for the one thing I had been wanting to hear since his birth: “I love you, Mommy.”

Truth be told, I shouldn’t need to hear it.  I see it in his sparkling eyes every time he looks at me and I can feel it in his sticky hands and arms when they wrap around my neck for a tight squeeze.   This little boy loves his Mama… but I still wanted to hear it.

Every night, at bedtime, and every morning, at breakfast,  I would practice with him — over-exaggerating the formation of the sounds — to show him how to form the words.

And he would grin in response.

Then, one night, after reading his CARS book for the millionth time, I looked into his drowsy eyes and, before I could say it, he did.  He said it.  “I lul’you, Mommy.”

To say I cried is an understatement.  Waterfalls gushed as I snatched him up, hugging and kissing and squeezing that little boy while he laughed, thinking we were in the middle of a game.

Letting go, I looked back at him.  “I love YOU, Barney Kneeknuckles.”

His impish grin spread once again across his face and he responded with my new favorite words.