As I bragged to my friends on Facebook, I am working on Hubby’s Christmas gift … a really GOOD Christmas gift.  I am so stinkin’ excited to give it to him that I kinda want to go ahead and ruin the surprise by telling him about it.

(B-u-t, I’m restraining my big mouth… which is really harder than it should be at thirty-something years old.)

The gift has to do with our relationship and time together (that’s all I dare say here in case he reads this post) so I’ve had a lot of opportunity to think about our marriage, and it’s scary how close the Hubby and I are getting to our 10th wedding anniversary. 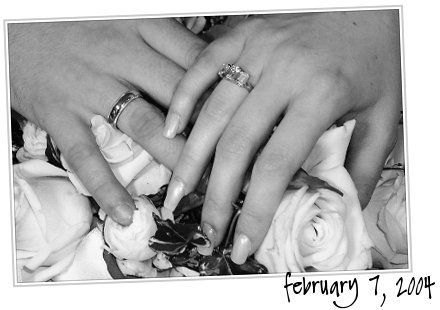 (well, Hubby is … he’s QUITE a bit older than me, as I like to remind him every chance I get)

Way back in 2004, a whole three months and one week after we started dating, I was walking down the aisle of a small country church to marry the man who is still my best friend.

Less than a month after that February date . . . he had already lost his wedding ring.  The ring *I* had carefully picked out to match his precious, precious Texas A&M “Aggie Ring.”  The ring *I* had gently placed around his finger, repeating my vows as did so.  The ring *he* had promised to always wear.

(‘Cause I told him women ALWAYS look for a wedding ring on a guy … and women would automatically classify him as “marriage material” and a “good guy” … and he had BETTER make sure that ring was on his finger to deter any little hussy.   Hmph!)

It was gone.  Forever gone.  Rattling around in the car motor of a guy named Tito.

Losing your ring in the car belonging to a man named Tito could only happen to my husband.  It’s just the kind of luck he has.  To this day, he blames the cold weather for “shrinking” his fingers and causing the ring to slip off.  Cold, miserable luck.

Since I couldn’t let my boy run around without a wedding ring, I quickly marched him to one of the local jewelry stores and made him get a tungsten wedding ring.  And, during the process of looking at the rows of  “guaranteed to last forever”  titanium and tungsten rings for men, I learned something: Hubby had NOT liked his original wedding ring.

Hubby didn’t like that it was shiny and gold and “traditional”.  He wanted something edgy like a black tungsten ring.  A James Bond ring … not a Mr. Darcy ring.

I was heartbroken– a new wife finding out her husband didn’t like the ring she picked out for him?  Please.  Who wouldn’t be a trifle hurt by that?

Hubby is his own person.  He likes football, Rambo and Karate Kid movies, and shooting guns.  A Texan who loves fried foods, cigars, and dominoes.

Being aware that Hubby is completely different than me has helped me know how to communicate with him … helped me understand him … and now, nearly a decade later, is helping me give him the BEST Christmas present I could ever give that boy.

(I really can’t wait to share the details on this gift!)

All because of Tito and his car.