As we discussed last week, my husband is being a rat and has decided we do NOT need to find out the gender of the baby that is making me look like this: 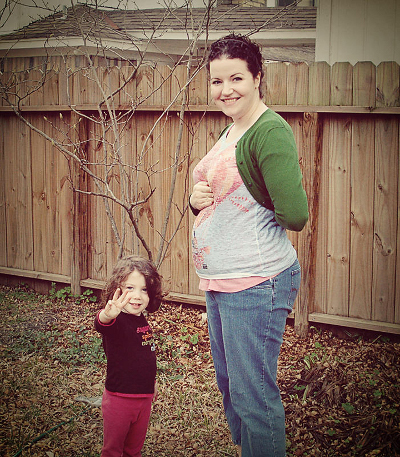 As the Little Lady is proudly showing, we're in month THREE!

In my efforts to thwart his ridiculous decision, I am trying every over-the-counter gender kit and Old Wives Tale method I can . . . I WILL know what this baby is going to be.

This week, I tried the Gendermaker Test.

There is even SCIENCE behind this test.

Reaction occurs when chemical compound is being dissolved and mixed with solute molecules in the urine resulting from biochemical activity within the cells of the body, and triggers the color dye elements that correlate to specific gender.   {from the Gendermaker site}

If you order from the Gendermaker site, the test runs about $29; I ended up ordering my Gendermaker test off Ebay, where I purchased it for $19.  Gotta love a cheaper option!

The one difficult thing about this test is refraining from the typical “Nightly Preggo Bathroom Break.”  That’s right; you’re supposed to hold your urine around 10 hours before taking the test.  Can we say OUCH?!?!?!?!!!!!

During the night, I woke up several times, aching to run into my bathroom . . . but for the sake of knowledge, I didn’t.

(someone needs to give me a cookie for that)

When I awoke for the day, I collected my urine sample and (after allowing it to cool per the test instructions) added a bit of it to the test cassette.

Within three minutes, I had my official Gendermaker test results: 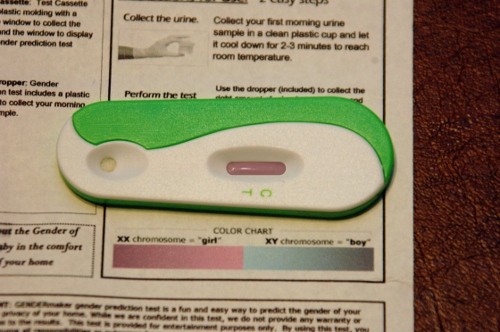 But, is it ACCURATE?

Obviously, only time will tell.  On my due date club, several of us have tried this test.  So far, with the exception of ONE test, all of the tests have produced a GIRL result.  Um, surely we’re not all producing sugar and spice, but the Gendermaker website (as of today) says there is a 98% accuracy rating.

We’ll see about that.

For next week’s attempt to determine this baby’s gender, I’ll be trying out the “RED CABBAGE TEST.”  I’m kind of scared.

Disclosure: I did NOT receive this product for review and I was not asked by Gendermaker or any affiliate to write this post.  I did it ’cause I wanted to do so . . . that’s all!