I did it — tried to sneak off and find out what gender Numero Three is.

Being “Team Green” (that’s what having a surprise-gender baby is called on all the mommy forums) was all Hubby’s idea and I just couldn’t do it.

But, just like at our anatomy scan last week, my plans were foiled.

First, I called my OB’s office and let them know I had changed my mind.  Sure, I felt a little sheepish leaving that message, but I was willing to be a little embarrassed if it meant I could know the answer to “Pink or Blue.”

They were prepared for Mamas like me and I was confidently told, “Sorry – we don’t know what you’re having either.”  Yeah, isn’t that just fun?  Turns out when parents say they don’t want to know, the Ultrasound Tech doesn’t tell . . . not even the doctor.  They’re ALL about keeping that big news a surprise for everyone.

Then, after talking to Hubby, it was decided that I could try finding out through another ultrasound . . . as long as I didn’t tell HIM the results.

I was fine with this arrangement.

My unborn child, however, was not.  He or she is one DETERMINED little sucker.

Friday, the kidlets and I found ourselves in a not-so-very-nice-or-safe part of Houston, looking for the business that would reveal if we were getting a Little Brother or a Little Sister.

We left less than thirty minutes later, a cute 3D/4D image in hand, and no “official” verdict for the issue at hand.

So, while I can’t tell you if this face belongs to a boy or a girl, I can introduce you to Barney Kneeknuckles. 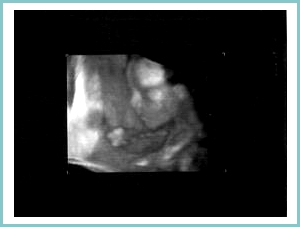 The best keeper of secrets ever.

Oh, and the name?  That’s just our way of keeping slick grandparents from trying to weasel the baby’s name out of the Little Lady. . . she may hear us discussing our “real” names for the baby, but she thinks he/she is going to be called Barney Kneeknuckles.

Mommy and Daddy are good secret keepers too.

« Without My Camera Phone, I’d Miss Moments Like These
Trying To Use Up Instead of Buying More {menu-plan} »