He’s here and has been given the name, “Twinkle.” 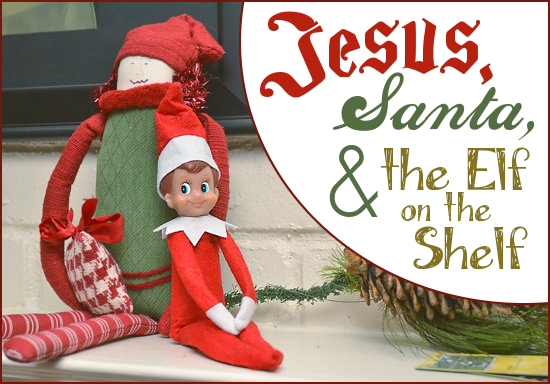 For awhile, it looked like our Lil’ Elf’s name was going to be Booger Mountain (Booger being Mr. Boy’s name suggestion and Mountain came from the Little Lady)… Hubby thought the combo was fantastic, but Mommy’s better judgement prevailed.

(No way was I going to spend each morning asking the kidlets if they could find Booger Mountain.  No. Stinkin’. Way.)

Twinkle arrived after dinner last Thursday; I had told the kidlets earlier in the day an Elf was coming to stay with us for awhile.  The Little Lady was ECSTATIC and told absolutely EVERYONE with whom she crossed paths that a “real, live” elf was going to visit us.

(She was a little confused when he showed up and looked just like a plain old doll.)

There was a knock at our front door … or so Hubby and I said.  And, thanks to the power of suggestion, both of the kidlets claimed to have heard the noise as well.  To the door everyone raced and when it was opened, we found a humble package.

A very cold package thanks to a few hours at the North Pole. 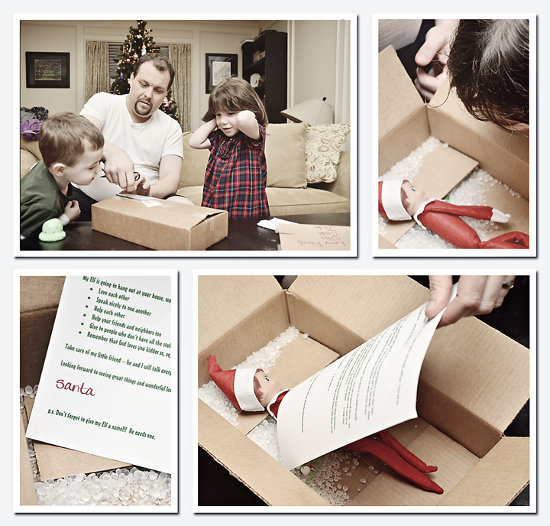 The kidlets discovered Twinkle, laying on a bed of “North Pole Ice,” and an introduction letter from Santa.

As I’ve mentioned, I struggle with the idea of introducing Santa to the kidlets.  I don’t think the concept of Santa is evil, but I don’t want Santa to become the sole focus of the Christmas season for the kidlets … and I feel like it is very easy to slip into that.   Yes, I want them to have fun and enjoy the “magic” of Santa but I also feel very torn (convicted, maybe?) about having Santa and the whole “good list vs. naughty list”  and “what do you want for Christmas” enter into my kidlets’ world.  I am still questioning whether or not it was a good idea to bring in the ol’ guy.

But, for now, we now have Jesus, Santa, and an Elf named “Twinkle” in our house.

The letter is where I went off-script, so to speak, from the Elf on a Shelf book.  Our Elf isn’t here just to report who has been naughty or nice.  We’re not threatening the kidlets with the whole “naughty kids don’t get presents” thing.  No,  Twinkle is here — as a tangible way —  to help the kidlets remember (or learn, in Mr. Boy’s case) a few basic principals:

So, the little Elf in your box is here to help you kids (and your Mommy and Daddy) remember these important parts about Christmas: Jesus, God’s love and our job of joyfully sharing that love with others through our gifts, kind words and loving actions (the things we do for one another).

My Elf is going to hang out at your house, watching everything that happens … as a reminder for you to:

(you can read the entire Santa letter here)

Every morning, the Kidlets look for Twinkle, find him, and go about their days.  And at night, through our nightly Advent activities (as well as in conversations during the day), we’re combatting the Bermuda Triangle of Materialism and trying very hard to show (teach) the kidlets compassion for others instead of “gimme, gimme, gimme.”

I dunno — maybe I shouldn’t try melding everything and everyone.  Maybe I should kick Santa back to the North Pole.  Or, maybe I should just drink more Caramel Brulee Lattes (to which I’m dangerously close to becoming addicted) and forget about it all.

This parenting thing is tough.

Especially when you’re trying to teach your children how to live outside of the word “Me.”